The Story Behind the 2016 Fair Book Cover 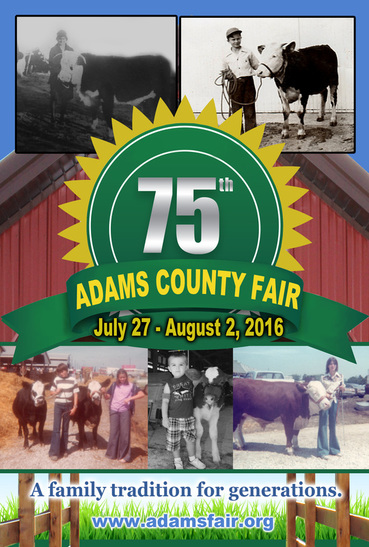 The Adams County Fair has always been a proud tradition for countless families in the region.  Summers at the fair are vivid memories for many people we have been talking with this year in honor of the Fair's 75th Anniversary.  Click here for a brief history of the Adams County Fair.

When embarking upon this design project Fair Board Director Melissa Shriver-Hackamack wanted to portray this tradition in photos.

The Shaffer family seen here on the cover embodies this tradition.  Thanks to Kim Bush her other family members, we were able to see her family pass their love of the Adams County Fair from generation to generation.

The first portrait on the top left is Louise Jansen in the early 1900's, who later married Floyd Shaffer.

The black and white picture at top right is Floyd and Louise Shaffer's son Don Shaffer.

Don Shaffer passed his love of showing beef cows to his children.  At bottom left are two of his children Tim and Deb Shaffer.  At bottom right is his other daughter Kim (Shaffer) Bush.

At bottom center is Kim Bush's grandson Brody Otto who was three year old at the time.  Brody loves animals and hopes to
show cattle someday as well.